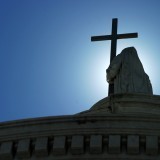 Statue of St.Willibald at the St. Willibald church in Munich - Pasing

Saint Willibald was born in Wessex on 21 October around the year 700. His mother Wuna of Wessex was a sister of Saint Boniface and his father was a chieftain of Wessex who came to be known by the name of Richard. At the age of three, Willibald suffered from a violent illness. His parents prayed to God, vowing to commit Willibald to a monastic life if he was to be spared. Willibald survived and at the age of five entered the Benedictine monastery at Waldheim) and was educated by Abbot Egwald. At the monastery he became accustomed to the Irish and Anglo-Saxon monastic ideal of peregrinatio religiosa, or pious rootlessness.

Added to Willibald and categorized in Benedictine — 2 years ago